You hear it all the time. Somebody’s tubes aren’t working because they are ‘cooking’ the bait. In reality almost EVERYBODY is cooking their baits.

Example: Independence Hub in the Gulf of Mexico.

When bait fishing early one morning before the sun rises the crew hooks a blackfin tuna at 160′ deep. The fight is pretty quick, the crew horses the bait in, nets it and it goes straight into the tuna tube.

This same progression happens over and over throughout the summer at the rigs. So let’s break down the numbers here.

Here are the temp readings by depth at Independence Hub that morning.

Without getting too scientific Tuna are a warm blooded species. Tuna can heat up, but rely on the water temp to cool back down. We all know that if you bring a tuna onboard you have to let them cool down on the deck or they will literally eat all the ice in your cooler. They come onboard HOT.

In the example above the tuna was hooked at 160′, so the temp at that depth is 71° F. The bait is fought for a couple mins, in which time it builds up body heat. The bait is brought up to the surface where the water temp is 83.5°, and we are immediately putting the bait in 83.5° tuna tube water. This in essence shocks the tuna due to the huge temp difference of 12° over an extremely short time. In addition, during the day that tuna was swimming in excess of 300′ deep, which was even colder water of 63° which translates into an overall temp swing of 20°.

*disclaimer: The temps above were taken 10/18/2018, temps will absolutely fluctuate. Temperature swings from depth to surface may be more or less than shown above due to ocean currents, upwellings and downwellings.

So the water is a little warm, what gives??? The REAL key here is the relationship between water temp and dissolved oxygen carrying capacity of that water. This is covered in detail in the Tuna Tube Oxygen and CO2 Levels section. Please refer to it for further in-depth discussion.

So, the problem at hand is hot water, how do we fix this? The simple answer is ‘cool it off’, but in practice this becomes quite a challenge.

On a traditional tuna tube setup the water is sucked from the ocean, passes through pumps/plumbing, through the bottom of the tuna tube and expelled overboard. In this setup there is very little option to cool the water more than just a few degrees (which will absolutely help). The type of system that can GREATLY benefit from chilling water is a partially recirculating system to which Bait Socks are designed for.

For this example I’m going to use a free standing baitwell that has Bait Socks installed. In this install a pump takes about 800gph from the ocean and dumps it into the tank. The bait socks pull water from the bottom of the tank and run it through the bait’s gills. The water spills over the top of the tuna tube and returns to the free standing bait well. The flow to each of the 6 Bait Socks is 800gph, but the overall turnover of the baitwell is 800gph. Water enters the baitwell and leaves (dumps overboard) at the same rate it enters.

For this install cooling the water can be achieved as simply as putting two or three frozen 2-liter bottles filled with water in the bottom of the baitwell. They will serve to cool the water several degrees and last several hours. Once the bottles thaw and temps start to rise, the bottles can be removed, re-frozen and fresh frozen bottles can be added. Since the freshwater in the bottles is contained this will have no effect on salinity (which would kill the bait). PLEASE do NOT dump ice directly into your tanks, it will kill your bait. 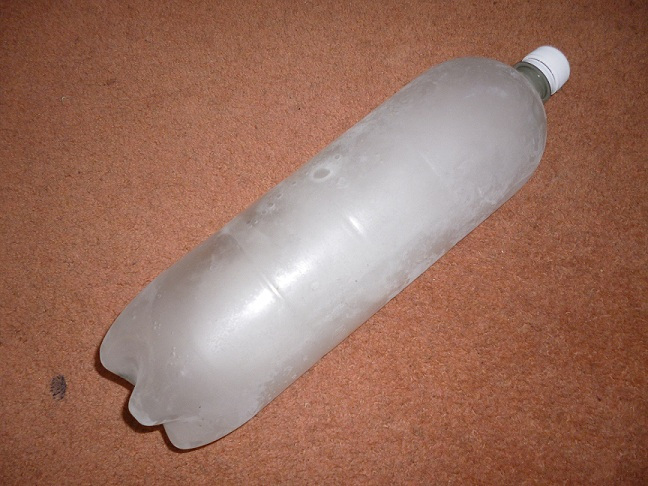 So, cooling with frozen water bottles helps on a small scale installation where maybe the boat doesn’t have the ability to run a larger scale chiller. It is great for center consoles and smaller sportfish boats. But how do you handle this when you are dealing with 100’s of gals of water on tuna tube installs that have 20+/- tuna tubes? The solution is a much more permanent and efficient system which employs an actual chiller with heat exchangers on a closed loop.

To keep this simple I’m going to re-use our same install from above. Remember we have 6 Bait Socks in a free standing tank. We will take water from the tank, run it through a pump, through a heat exchanger and back into the tank. The heat exchanger will have one side chilled water, the other side seawater from our tank. This will drop the temp considerably, with our goal being to match the temp water the bait originally came from. Personally I like to shoot for the water temp at 300′. In the temp example above that means we want to drop the temp 20°. That is a big temp drop, but you will be absolutely amazed at how long your bait will live and how frisky they will be as you start dropping the temp of your tuna tube water.

If you have a traditional tuna tube setup, where water only passes over the bait once there are a few options for you. The best solution is to convert to a partially recirculating system. When you move to a partially recirculating system you remove a LOT of the pita problems with tuna tubes. You can completely control your flow to each individual tube, you can now control temperature and overall flow turnover in your system will be reduced, so issues like bubbles and loosing bait when backing hard or cavitation all instantly disappear.

If your flows are already good and you just want to drop temps you can drop temps 2-5deg just by passing the water through a heat exchanger on the way to your tuna tubes, but this will reduce flow slightly. So this option is only recommended when you have flow to spare and can turn your pumps up a little to offset flow lost to the heat exchanger.

GET THOSE TEMPS DOWN!!

Next Article in this Series >>

<< Previous Article in this Series